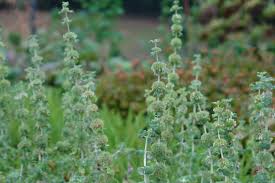 Marrubium vulgare (white horehound or common horehound) is a flowering plant in the family Lamiaceae, native to Europe, northern Africa, and southwestern and central Asia. It is also widely naturalized in many places, including most of North and South America. Horehound has been mentioned in conjunction with medicinal use dating at least back to the 1st century BC, where it appeared as a remedy for respiratory ailments in the treatise De Medicina by Roman encyclopaedist Aulus Cornelius Celsus. Since then, horehound has appeared for similar purposes in numerous herbals over the centuries, such as The Herball, or, Generall historie of plantes by John Gerard, and Every Man His Own Doctor: or, The Poor Planter’s Physician by Dr. John Tennent. Ancient Romans and native Americans used it to treat respiratory conditions. White horehound is the common name of Marrubium vulgare, a small flowering perennial plant that looks a great deal like mint, and is a part of the same family. It also boasts many of the same health benefits as other members of the family, making it an important plant in a number of traditional medicinal practices. The plant is relatively small, not growing higher that 18 inches, with small leaves covered in small hairs. The flowers of this plant are white and can also be used, along with the leaves, in the extraction of essential oils. This plant has both medicinal and culinary uses, although they are closely connected.

Don’t let it’s bitter flavour put you off, try some honey with it!